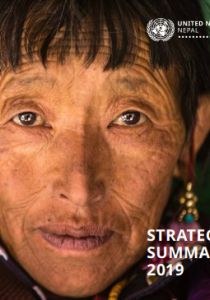 The Government of Nepal has shown its full support for the UN reform, welcoming the reforms towards creating synergy and coherence of the UN system, which adheres to the principle of keeping people at the centre. The reform,which will make the UN more fit-for-purpose, has been publicly commended during the statement by the Minister of Foreign Affairs at the General Assembly in September 2019.

In 2019, the National Planning Commission has scheduled the first UNDAF Steering Committee meeting with the UN for the UNDAF 2018-2022. The UN reported on the progress and achievements on UNDAF outcomes that the UN made in 2018 and discussed with Government counterparts on the challenges and opportunities for supporting the Government of Nepal to achieve the Agenda 2030 through the UNDAF. Compared to previous meetings, the Steering Committee meeting was more strategic and focused, with an emphasis on creating a forum for constructive and productive dialogue.

Besides the points above, at the country-level with the ongoing focus of the Government of Nepal in its transition to federalism, the UN in Nepal has not felt significant changes in the Government’s response towards the UNCT in response to the reform environment.