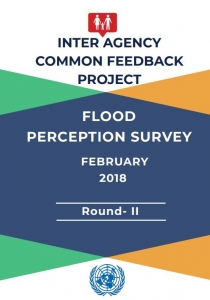 In December 2017, the Inter-Agency Common Feedback Project completed 1800 Community Perception Surveys at the household level with community members randomly selected throughout 10 priority flood affected districts. This was the second round of data collected in flood affected districts. Among the 1800 respondents, 69 percent said they were affected by the floods, and an additional 25 percent were minorly impacted by the floods. The five percent who claimed not to be affected by the floods at all were excluded from further analysis. Among those who were affected, the most significant impacts were in livestock shelter damage (57 percent), household asset loss (43 percent), food/grain storage loss (42 percent) and household damage (42 percent). This clearly illustrates that the main impacts of the floods were not necessarily in the housing sector. Therefore, categorizing flood affected people, and their entitlements, based on house status, as was done in the approach to earthquake recovery, may not be the most appropriate strategy.

23 Mar, 2021
UN Framework for Responding to the Socio-Economic Impacts of COVID19 in Nepal
Download file
END_OF_DOCUMENT_TOKEN_TO_BE_REPLACED