By ratifying a treaty, States parties willingly submit their domestic legal system, administrative procedures and other national practices to periodic review by the committees of independent experts. These committees are often referred to as treaty-monitoring bodies (or “treaty bodies”).  The main functions of the treaty bodies are to examine reports submitted by State parties and to consider complaints of human rights violations.

The different committees established are composed of independent experts acting in their individual capacity and not as representatives of their Governments, although they are elected by representatives of States parties. Members are elected according to the principle of equitable geographic representation, thus ensuring a balanced perspective and expertise in the major legal systems. The main functions of the treaty bodies are to examine reports submitted by States parties and to consider complaints of human rights violations.

By virtue of their responsibilities, treaty bodies serve as the most authoritative source of interpretation of the human rights treaties that they monitor. Interpretation of specific treaty provisions can be found in their “views” on complaints and in the “concluding observations” or “concluding comments” which they adopt on State reports.

In addition, treaty bodies share their understanding on and experience of various aspects of treaty implementation through the formulation and adoption of “general comments” or “general recommendations”. At present, there is a large body of general comments and recommendations serving as another valuable resource with regard to treaty interpretation.

Complaints of human rights violations are technically referred to as “communications”.

Reporting procedures: All treaties require State parties to report on the progress of implementation of the rights set forth in the treaty. The common procedure is as follows: 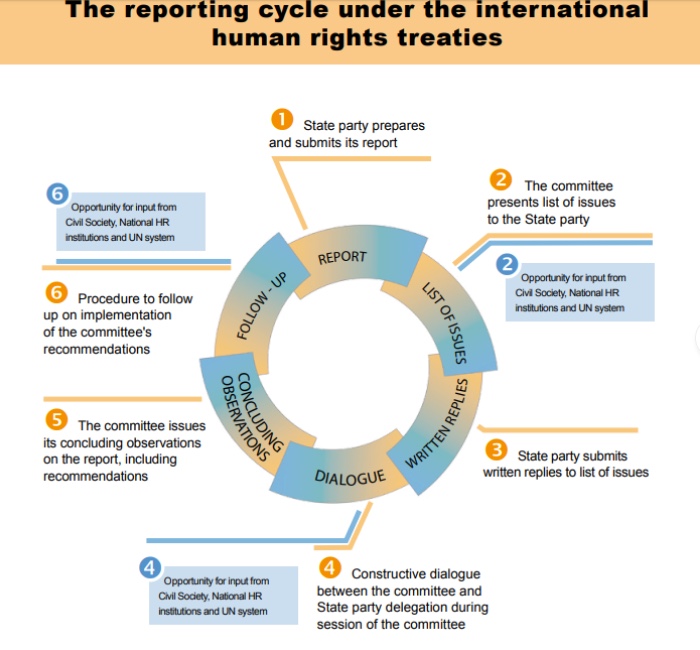