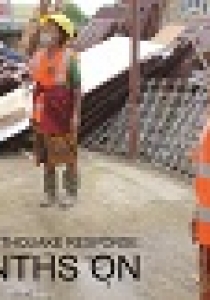 On 25 April and 12 May 2015, devastating earthquakes measuring 7.8 and 7.3 Richter killed at least 8,790 people and destroyed 498,852 houses across Nepal. Together with local communities, humanitarian organizations and the Government of Nepal, the International Organization of Migration (IOM) launched relief activities to meet the needs of those affected. Amid terrible disaster and suffering, the strength, solidarity and resilience of the people of Nepal was clear. People came together to help their neighbors, spearheaded search and rescue efforts, shared what they had and volunteered in temporary camps. Within days many were on the move, returning to their village or their extended family to bring food, plastic tarpaulins and other help. Families and friends around the world sent also sent assistance, tripling remittances in the aftermath of the earthquake. Soon after the earthquake, one of IOM’s local partners met Reshma Adhikari living in Khopachagu in Dolakha district. Her house collapsed in the earthquake, and Mrs Adhikari and her family constructed a temporary shelter with some corrugated iron sheets distributed by a local organization, and also received some food. Although she had lost her house and her main livelihood, she never lost her hope and spirit, focusing instead on providing for her family. Six months after the earthquake, IOM is employing Mrs Adhikari and others in her community to clear debris from the collapse of the Kali and Tripura Sundari Temples. She plans to use her salary to purchase construction materials and begin rebuilding, and also to bring the family together in the upcoming festival season. Six months on from those terrible days, IOM would like to dedicate this booklet to the people of Nepal, in appreciation of their compassion, hope and determination, and in solidarity for the road to recovery ahead.