Gender, jobs and education: prospects and realities in Nepal 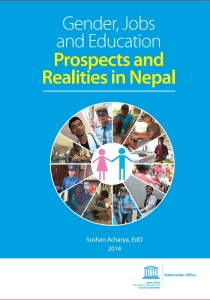 Gender, Jobs and Education: Prospects and Realities in Nepal is part of the series of studies undertaken in Cambodia, Indonesia, Mongolia, Nepal and Vietnam. Consolidating all the country studies, UNESCO Bangkok has published a synthesis report entitled ‘Gender, Jobs and Education: Prospects and Realities in the Asia-Pacific’. In Nepal, as in other participating countries, an empirical study was undertaken in 2013 to understand the relationship between Nepal’s labour market and the education system. Major lens used to see this relationship was gender. This report focuses on the involvement women and men participating in education and the labour market,Nepal’s education system; and female and male students’ perceptions about suitability of different occupations. The report then analyzes the relationship between different dimensions of education and the labour market. The study was conducted among 319 (158 female, 161 male) grade 10 students and 470 women and men engaged in different occupations. Research was conducted in 8 districts including Kathmandu Valley.