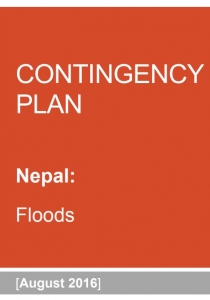 Nepal continues to struggle from the combined effects of a chronic food insecurity and undernutrition, high rates of poverty and political transition following the 10-year conflict. In April and May 2015, Nepal was hit by two major earthquakes. The Kathmandu Valley and parts of the mid-hill areas remain subject to aftershocks. Every year, between June and September, flooding and landslide in the Terai and Hills respectively warrants increased preparedness by the Government and the Humanitarian Country Team (HCT). In 2014, heavy rainfall caused floods and landslides across 17 districts causing 134 deathand affecting over 45,000 families. Four districts of Nepal’s Mid-Western s Region witnessed the most severe devastation with nearly 29,000 affected families and 28,000 damaged houses.

To optimize the speed and volume of critical assistance, the HCT has developed this Plan to: