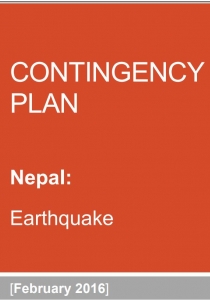 In April and May 2015, Nepal was hit by two major earthquakes killing around 9,000 people and leaving many thousands more injured and homeless.

With the availability of historical records, new data and methodological improvements, the Humanitarian Country Team (HCT) and key partners engaged Durham University in developing a seismic hazard model at the country level. This worst-case scenario describes a Mw8.6 earthquake generating high shaking intensities across an area from the Terai in the south to the Himalaya range in the north. While consultation with in-country seismologists continue, the HCT endorsed the scenario for planning purposes incorporating lessons from the 2015 response.

The Far-Western region of Nepal is likely to experience the greatest impact of the scenario: 20km Depth, 475km rupture length, max intensity 9 (violent). Overall, based on the projections of this ‘worst case’ scenario, the possible humanitarian consequences and needs include over 280,000 people killed, 3.5 million people injured, 7.8 million people displaced and 927,000 destroyed houses. This is exacerbated by significant damage to roads and public infrastructure impacting access and services to affected communities.

To optimize the speed and volume of critical humanitarian assistance, the HCT has developed this Plan to: