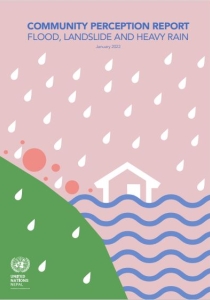 In early 2021 Nepal was selected as a pilot country for OCHA’s Central Emergency Response Fund’s anticipatory action project. Anticipatory action is an attempt to design response intervention and act to execute them in advance of a predictable natural hazard, with an aim to mitigate the risk faced by exposed communities and prevent the loss of lives and livelihoods. By acting prior to an imminent disaster based on predictive models, humanitarian action becomes more effective, efficient and dignified. OCHA allocated $6.7 million for the pilot in Nepal for a potential flood event in two major river basins.

In the months leading up to the onset of monsoon season, five partner agencies worked closely with OCHA and the UN Resident Coordinator’s Office (RCO) to agree on a scientific trigger which would indicate a largescale flood event was coming, a package of pre-defined interventions to be carried out upon the trigger being activated and pre-agreed financing to enable these activities. Given the COVID-19 context, and the short window of time between the anticipatory action framework design and the onset of monsoon, readiness and action activities of the anticipatory action pilot in 2021 were designed based on the experiences of participating agencies and did not involve an inter-agency community perception survey.

Although no major flood event happened during the monsoon season, Nepal witnessed unseasonal heavy rains shortly after monsoon season, resulting in a string of floods and landslides across the country. As it was the time of harvest, many crops had been cut and were washed away. It was estimated that up to 35% of crops were lost in some areas, representing a massive loss to food supplies in affected areas. Communities in Province One, Province Two, Lumbini and Sudhurpaschim were affected particularly.

Accountability to Affected Populations (AAP) is one of the guiding principles of humanitarian action, and has long been a focus in Nepal. The RCO can carry out community perception surveys in the event of a disaster, as an inter-agency common service, with funding provided by FCDO. Following the extreme weather event, the RCO can carry out a community perception survey, and integrated questions relevant to anticipatory action work, in order to feed into revisions of the project for 2022 and ensure the work is better aligned with the needs and priorities of the communities it aims to serve. In addition, the community perception survey will also contribute to preparedness activities for 2022.