Clearing Away The Rubble : Moving Beyond Blockages to Reconstruction Progress 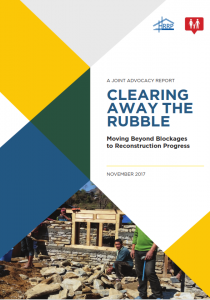 The Government of Nepal’s (GoN) National Reconstruction Authority (NRA) has reported that as of October 2017 only 19.5% of households eligible for the GoN’s reconstruction/repair grant have started construction. It has been widely discussed among reconstruction partners for a number of months that reconstruction is moving at a slower pace than was hoped. The Inter-Agency Common Feedback Project asks 2100 respondents from earthquake affected communities, every other month, if their main needs are being addressed. While initial progress in early 2017 was rapid, a clear plateau has been observed in recent months. With this report, we hope to bring together a useful analysis of the varied data streams available, and build consensus around a set of actions to ultimately aid the reconstruction community in overcoming this plateau.

23 Mar, 2021
UN Framework for Responding to the Socio-Economic Impacts of COVID19 in Nepal
Download file
END_OF_DOCUMENT_TOKEN_TO_BE_REPLACED