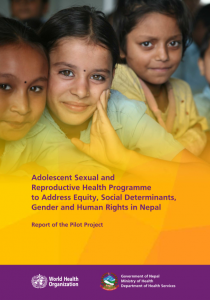 Nepal has shown its commitment to adolescent health through being a signatory to the  International  Convention  on  Population  and  Development  (ICPD)  Programme  of  Action.   Nepal was also involved when the WHO South East Asia Regional Office (SEARO) developed  the Regional Strategy for Adolescent Health and Development in 1996. In 1998 Adolescent  Sexual  and  Reproductive  Health  (ASRH)  was  included  in  Nepal’s  National  Reproductive  Health Strategy.

The Nepal Health Sector Program II Implementation Plan 2010–2015 included the target  of introducing 1000 AFHS in the public health system by 2015, thereby covering 25% of  the government health facilities. Though the demand of service and utilization has not been studied the coverage is as per the NHSP plan. The national reproductive health review meeting  in February 2015 identified gaps in quality assurance of the ASRH programme, weak capacity  of service providers, poor supervision and monitoring, poor ownership of the programme  at local level, poor linkage with other programmes and inadequate information education  and communication (IEC) and behaviour change communication (BCC) materials. Many of  these issues, particularly health promotion, improved monitoring and quality assurance, are  being addressed in the Nepal Health Sector Program Implementation Plan 2016-2020. Also, FHD has revised the NAHD Strategy from 2000.

The  Innov8  methodology  has  helped  department  of  Health  services  to  review  the  programme, drawing selectively on the principles of a human rights based approach and gender-responsive programming and the Tanahashi framework for effective coverage and the WHO framework on social determinants of health. The evaluation of health programmes in general don’t account for the heterogeneity of the populations, subpopulations that are benefiting less from the health programmes that are often missed and hence are neglected. This tool Innov8 will identify the populations which are not covered by the national ASRH programme. The process has strengthened the ability of the ASRH programme to increasingly cover the vulnerable and left out people who are exposed to risk factors, and to expand access to health services and improve the health status of adolescents. I would like to express my appreciation and my sincere thanks to all individuals who contributed during the workshop and developed this document. Equally, we acknowledge WHO headquarters, SEARO and the Country Office for Nepal in supporting the Family Health Division technically and financially during this whole process.